Clubs That Made The Rock History

The Places That Have Made The History 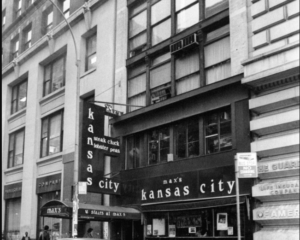 From Bill Graham’s Fillmore to CBGB. From Max’s to Whiskey a Go Go, the temples of rock where it would have been nice to be…

Many of those places have been the setting for the beginnings of important rock music artists: Patti Smith, Iggy Pop, Lou Reed, Rolling Stones, The Doors, and many many others.

But which were the most famous clubs, what was their history?

We all wanted to be in San Francisco when Jefferson Airplane, The Grateful Dead, Jimi Hendrix, The Doors or Frank Zappa were performing in Bill Graham’s Fillmore Auditorium.

When the most important cartoonists of the time (Moscoso, Griffin, and others), an expression of that psychedelic art that began to spread right at that time, hand-designed the posters of the artists who would perform in the evening. Helping to nurture that fame that over time would have made Graham’s clubs grow more and more.

Many over time have criticized Bill Graham, the music magnate, but we must admit that in a very few years he managed to create a very important musical movement, to make San Francisco the center. And when it also opened on the East Coast, success was immediate and double. Thanks also to the Factory of Andy Warhol. It was he who brought the Velvet Underground and Nico there. Led Zeppelin, The Who and Pink Floyd also performed in New York.

Some musicians said that Bill Graham took advantage of their performances and paid them very little, the fact is that most of them were very successful and we still remember them today. After all, the story is always the same and even today those who make live music, or play in various clubs, receive very low wages, but it is the passion for this art that pushes us to do better and better, to achieve success.

The Fillmores died with Bill Graham when his private helicopter crashed in Vallejo, California on the night of October 25, 1991. His companion and pilot also died with him.

We would have liked to have been at Max’s the night Bruce Springsteen debuted there with the E Street Band, or during the excitement of glitter rock to see the young David Bowie live. The Max’s Kansas City was opened by Mickey Ruskin in December 1965 and quickly became a New York landmark of musicians, artists and poets. Located at 213 Park Avenue South, the origin of the name is not well known, the only certainty is that it was the poet Joel Oppenheimer who suggested it to Ruskin.

Punk rock also debuted in this structure, here Patti Smith, The New York Dolls, the Ramones, and Sid Vicious performed after the dissolution of the Sex Pistols, but the decline began precisely in these years, when a new club marked the history of music: the CBGB & OMFUG. Literally acronym of “Country Blue Grass Blues and Other Music For Uplifting Gourmandizers”, it was opened on December 10, 1973 by Hilly Kristal. The initial goal was that the venue was a meeting place for lovers of country, blues and bluegrass music, but it became famous with the advent of punk music and became the hub of the New York scene.

The club began to gain some visibility in 1974, when Television and then the Ramones began to play live, who performed here for the first time in March 1974. In a short time the Talking Heads alternated on the tiny CBGB stage, Tuff Darts, MC5, Blondie and many other exponents of the music scene of the time. Over the years the venue has continued to offer punk programming, but Hilly Kristal was forced to close it following a long legal dispute with the owners of the property. It was September 30, 2006. Krystal promised to reopen in Las Vegas in 2008, but didn’t make it in time as she died on August 28, 2007.

It would have been nice to witness one of Connie Gripp’s jealousy scenes towards Dee Dee Ramone, or to catch Iggy Pop sitting at one of those tables… 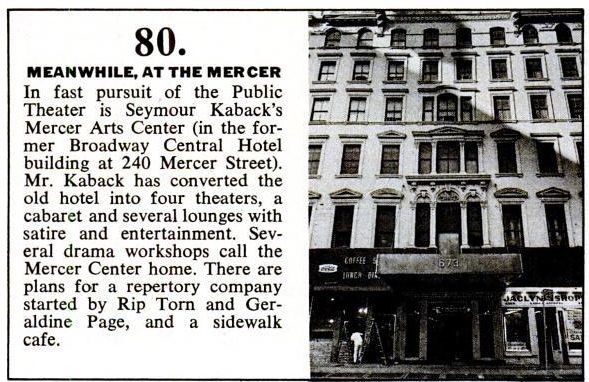 At the Mercer Arts Center, the music was different, in the most literal sense possible. Here mainly no wave exponents such as Brian Eno, David Byrne, Elliott Sharp, and many others gathered and performed. Opened in 1971 by Steina and Woody Vasulka, it has changed headquarters, but is still operational today; it still proposes to launch emerging artists in various fields beyond music, such as literature, dance, direction.

Impossible not to mention Whiskey a Go Go, also known as Whiskey, in this piece, but as you can see from the sign, the correct name is Whiskey. Opened on January 11, 1964 in a former police station, it took up the idea of ​​the first nightclub opened in Paris in 1947, frequented by American sailors who transplanted the idea to West Hollywood in California. Here too, some of the greatest performed: Aerosmith, The Byrds, Alice Cooper, The Doors, Toto, Jimi Hendrix, Black Sabbath, The Who, Led Zeppelin, Oasis, Elvis Costello, Nirvana, Guns ‘N’ Roses. The place is in good health and it is still possible today to attend live concerts by the most famous groups.

Among the various American clubs we also remember Kenny’s Castaways, Club 82, Phoebe’s, Mabuhay Gardens. For some they are places of perdition and ‘satanic’ music, for other places of worship to visit in memory of the most beloved artists, for still others the memory of a musical era that has changed the world and that will never be able to return.